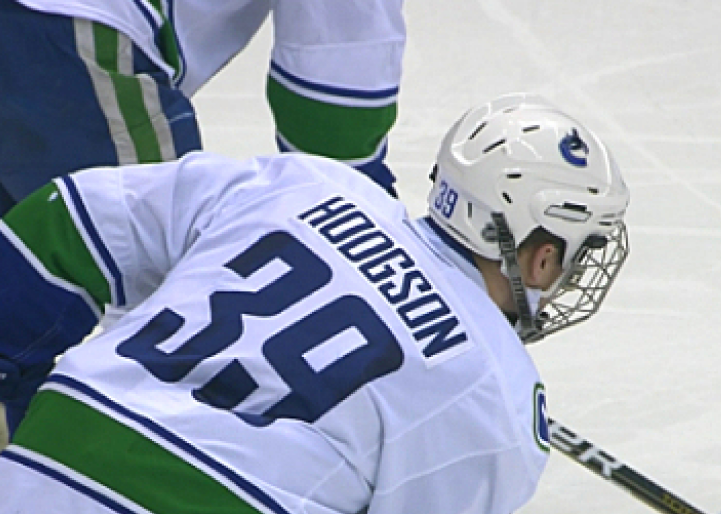 In 2008, at the age of 18, Hodgson was a first-round draft pick by the Vancouver Canucks, and the 10th overall selection in the NHL’s early entry draft

On Saturday, December 8, 2018, The RYR-1 Foundation and Toronto-native Cody Hodgson are proud to present a “First Look” screening of the upcoming documentary “Hodgson” at the Hilton Toronto/Markham Suites. Chronicling the career of former NHL player Cody Hodgson, the film is part sports drama, part medical mystery, and a life-affirming story of resilience and grit.

In 2008, at the age of 18, Hodgson was a first-round draft pick by the Vancouver Canucks, and the 10th overall selection in the NHL’s early entry draft. He had realized his lifelong dream of playing professional hockey, and was poised to achieve even greater things on the ice. Just a few short years later, he was struggling with severe muscle pain, shortness of breath, blackouts, heart arrhythmias, and bouts of uncontrollable shaking that affected his whole body.

Despite numerous tests, his symptoms confounded team doctors. Ultimately, he returned to Toronto and met Dr. Sheila Riazi (RYR-1 Foundation Scientific Advisory Board Member), at the University of Toronto. He was finally diagnosed with complications from malignant hyperthermia, an extremely rare condition he inherited due to a mutation on his ryanodine receptor 1 (RYR-1​) gene. There is currently no cure. In 2015, at age 26, Hodgson was forced to retire from professional hockey.

After meeting with Dr. Michael F. Goldberg, president of the Pittsburgh, PA-based RYR-1 Foundation, and learning more about the organization’s advocacy and awareness raising work, Hodgson decided to share his own story to help other individuals and families affected by RYR-1-related diseases.

“Hopefully, The RYR-1 Foundation and I can help to not only push for a cure, but also help the parents, patients, and families affected by it now so they can better understand their condition, take the appropriate precautions, and have a treatment available to them,” he explains.

“I am extremely grateful for the work that Cody is doing on behalf of the RYR-1 community,” said Dr. Goldberg. “He was a phenomenal hockey player and is an even better person. We are lucky to have him on our team.”

Since the trailer for “Hodgson” was released online earlier this month, it has been viewed over 20,000 times The December 8 screening in Toronto will be the first public screening of the film Hodgson will introduce the film and be available to answer questions from the media.

Cody Due to the tremendous response, this event is sold-out, and tickets are no longer available to the public. If you are interested in making a donation to The RYR-1 Foundation in honor of this event, please visit: www.crowdrise.com/o/en/campaign/hodgson.

About The RYR-1 Foundation

The Pittsburgh, Pennsylvania-based public charity was launched in October 2014 by members of the Goldberg family, who have been affected by RYR-1 muscle disease. It is currently the only organization that exists solely to advocate for and serve the needs of patients with RYR-1 myopathy, the most common cause of congenital myopathy. The mission of The RYR-1 Foundation is to support research leading to effective treatment or a cure for RYR-1-related diseases, to educate physicians about these diseases, and to provide patient/family support and advocacy. The RYR-1 Foundation is a public charity, designated as a 501(c)(3) by the IRS.