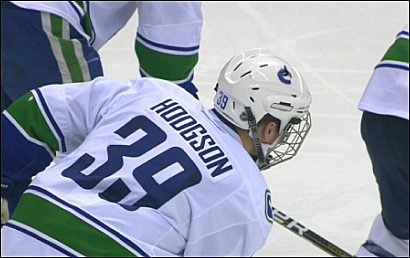 As the 10th overall pick in the 2008 NHL Draft, Cody Hodgson had a bright career ahead of him in the NHL. Cody played for the Vancouver Canucks, Buffalo Sabres, and Nashville Predators over the course of a six-year career

Although Cody had experienced muscle cramps his entire life, he dismissed them as a regular part of being a competitive athlete. As his symptoms became more severe during his professional playing days, he recalled, “I knew I had to get medical help.” He experienced many distressing signs and symptoms, including: trouble breathing, heart arrhythmias, severely low blood pressure resulting in “blacking out,” and tea-colored urine. The severity of these symptoms culminated in a hospitalization in 2015, when doctors diagnosed him with rhabdomyolysis, a severe and potentially fatal condition related to abnormal muscle breakdown.

During the 2015-2016 season with the Predators, Cody was referred to Dr. Sheila Riazi, an anesthesiologist and one of the world’s leading experts on malignant hyperthermia, a muscle condition most commonly due to a mutation in the RYR-1 gene. Dr. Riazi, a member of The RYR-1 Foundation’s Scientific Advisory Board, quickly realized that Cody’s numerous injuries, severe symptoms, and episodes of rhabdomyolysis were all likely due to RYR-1-related malignant hyperthermia. She ordered genetic testing and a muscle biopsy, which confirmed the diagnosis.

Receiving this diagnosis from Dr. Riazi was a source of tremendous relief for Cody. “You put up with a lot of injuries, and it takes a physical toll when you play hockey,” Cody said “but it really scares you when you are not sure what is going on with you.”

Watch a webinar with Cody premiering the “Hodgson” Documentary: