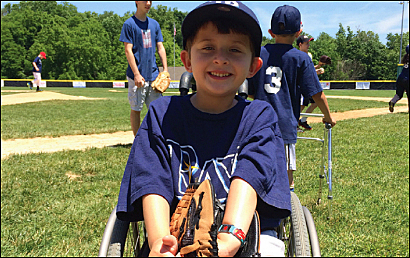 Jackson is a young boy with an RYR-1-related disease. He is currently unable to walk without assistance and is forced to alternate between a wheelchair and walker.

“The RYR-1 Foundation will change so many lives, and I am excited about its impact on ours.” – Marcie, Jackson’s mother

Jackson is a young teen with an RYR-1-related disease. He is currently unable to walk without assistance and is forced to alternate between a wheelchair and forearm crutches.

Jackson’s mother, Marcie, noticed problems with Jackson three days after birth, when he was unable to breastfeed due to weakness in his facial muscles. At six months of age, he had hip surgery–this would be the first of many surgeries, which often required prolonged inpatient stays and intensive outpatient therapy.

Currently, he sees numerous specialists to deal with complications related to his RYR-1-related disease, including neurologists, orthopedists, and pulmonologists. In addition, he must use a walker, orthotic braces, a gait trainer, forearm crutches, and a wheelchair. His family’s home has had to be adapted to include a ramp and stairlift.

In addition to the physical toll this disease has taken on Jackson, there is a significant psychological component as well. Marcie wrote to The RYR-1 Foundation: “Jackson was very aware that he was different from other children at a young age. Around age five, he was very angry and upset about his disability… He cried easily if he thought someone was staring at him or making fun of him.”

Despite all of this, Jackson is outgoing, friendly, and intelligent. He plays sled hockey and the cornet in his school band and school jazz band. He also loves science, geography, and learning new languages.

Marcie, Jackson’s mother, is on the Board of Advisors of The RYR-1 Foundation.